My immediately previous blog post, on the apparently in-large-part nincompoopic nature of the emerging global brain

attracted so many comments (largely on various mailing lists I posted the blog URL to), that I figured I'd post a brief response here, expanding on some of the ideas in the responses and connecting them with some ideas from dynamical systems theory.

Most of the feedback I got was in the general vein of a blog post I wrote a couple months earlier, entitled "On Becoming a Neuron":

The theme of "Becoming a Neuron" was how dependent we are, these days, on the global communication network and the emerging human group mind.

The theme of "The Global Nincompoop Awakens" was how many of the communications between the "human neurons" comprising the global brain seem completely idiotic in nature.

Reading through the comments on the Global Nincompoop post, I was struck by the theme of Bart Kosko' book Noise

(a somewhat erratic book, but containing some very interesting ideas). Among other topics he reviews the way the brain's self-organizing cognitive dynamics depend on the high level of noise present in the brain, introducing the general notion of "adaptive stochastic resonance", according to which

Noise can amplify a faint signal in some feedback nonlinear systems even though too much noise can swamp the signal. This implies that a system’s optimal noise level need not be zero

(Google or Wikipedia "adaptive stochastic resonance" for a load of technical papers on the topic, by Kosko and others). 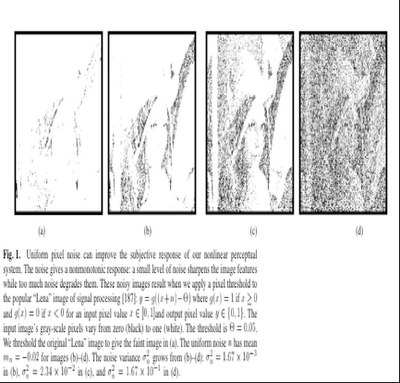 This picture shows nicely how, in the context of the human perceptual system, adding noise can help make patterns more perceptible.

Now, Kosko verges on insinuating that this kind of exploitation of noise is somehow a NECESSARY property of intelligent systems, which I doubt. However, it seems plausible that he's right about its role in the human brain and human perception/cognition.

Semi-relatedly, I recall reading somewhere that motion-sensing neurons in the brain are, on average, off by around 80 degrees in their assessment of the direction of motion of a percept at a certain point in the visual field. But we can still assess the direction of motion of an object fairly accurately, because our brains perform averaging, and the noisy data gets washed out in the average.

In other words, brains contain a lot of noise, and they contain mechanisms for working around this fact (e.g. averaging) and creatively exploiting it (e.g. adaptive stochastic resonance).

This brings up the interesting question of what techniques may exist in sociological dynamics for exploiting noise.

How might adaptive stochastic resonance, for example, play a role in sociodynamics? Could it be that the random noise of nincompoopic social interactions serve to make significant sociodynamic patterns stand out more clearly to our minds, thus actually enhancing the ability of the Global Brain to recognize patterns in itself?

I wonder how one would make an experiment to demonstrate or refute this? It would of course be difficult due to the massive number of confounding factors in any social system, and the difficulty of defining things like pattern and noise in the social domain as precisely as is possible in a domain like image processing (where of course these terms are still susceptible to a variety of interpretations).

And surely this simple idea -- obtained by extrapolating Kosko's image-processing example to the sociological domain -- is not the only possible way that social systems could profitably exploit their intrinsic noisiness.

But still, it's an intriguing train of thought....

(P.S. The question of whether this kind of chaotic, noisy, self-organizing system is remotely the best way to carry out creative computation is a whole other question, of course. My own strong suspicion is that human brains are incredibly inefficient at using their computational power, compared to other sorts of intelligent systems that will exist in the future; and the Global Brain likely shares this inefficiency, for similar reasons. However, this inefficiency is partially compensated for in both cases by biological systems' (neurons' and humans') prodigious capability for replication....)
Posted by Ben at 5:18 PM

I wonder how one would make an experiment to demonstrate or refute this?

I suspect that such an experiment might involve massive distributed chatbot nets... :-)

I am a student of Psychology in London, UK and I want to thank you for all those fresh perspectives. You dare to take on a complex approach to unite the fragmented fields within Psychology, a much needed step to be able to make progress on a larger scale. citypsychology [AT] gmail [DOT] com, in case you would like to make contact with the Psychology Students at City University London who would welcome such input from outside and speakers who work within that consciousness very much.

Hello,
It's time to work with new project and make more clients. Make photography business more effective by taking our editing service. In fact, if you are really serious about your financial success, you can deal with Clipping Path Adept. We will give you the best editing service within your budget and it's on time.