In which Dr. Goertzel briefly outlines a new way of thinking about the Global Brain , in terms of the concept of "glocal memory" ... leading up to, at the end, a new suggestion about what the first super-powerful AGI on our planet may look like (to wit: AN INCREMENTAL MIND-UPLOAD OF THE GLOBAL BRAIN)..


Recently I was sitting in a late-night dinner meeting in Tsim Sha Tsui, in a private room overlooking the spectacular Hong Kong harbor, with


and discussing the possibility of coming together to make an amazing AI-powered humanoid robot...

After a few glasses of excellent wine, I started thinking about all the trends and patterns that had come together to bring us to that restaurant to discuss that project.   All the trends that had converged to make Guangdong Province the world center of consumer electronics manufacturing.  The factors underlying the current relatively easy availability of mainland Chinese funding for interesting tech projects.   The factors that had brought me to Hong Kong -- Hugo de Garis's position at Xiamen University, Gino Yu's assistance getting funding for OpenCog work at Hong Kong Poly U, the convergence of international bankers in Hong Kong enabling funding of Aidyia Holdings, our AI based hedge fund, etc. etc.

And I started to feel how, for sure, my individual self and my feelings of will and purpose and so forth, were mostly just being swept along by large forces and trends....   Somehow, it seemed, we had all been gathered there via sociocultural forces beyond our control and comprehension, because the universe wanted amazing humanoid robots built, and we were a reasonable team of people to do it....

I fell in love with a girl named Ruiting Lian in Xiamen in 2009, and now being married to her is helping my understanding of the Chinese system in general -- helping me collaborate with Chinese programmers, and do business with Chinese firms.   I met her because Hugo de Garis invited me to Xiamen, where he was because the Chinese university system was more open to his wacky ideas than the US university system. Even the most intimate and personal parts of our lives are driven along by these broader trends, and then help push these broader trends along.

Of course, there is lots of contingency in any particular series of events -- if I hadn't happened to meet RUITING and get so overwhelmingly charmed by her personally, then I might not have relocated to Hong Kong, and lots of other things might be different....   Perhaps my meeting Ruiting may "cause" a revolution in humanoid robotics to happen years earlier, or in a fundamentally better way, than would have happened otherwise...

But on the other hand, if I hadn't moved to Hong Kong and if I had focused my work these last couple years on (say) theorem-proving rather than robotics, then probably someone else would have done comparable robotics work to what I'm now doing.   The same broader trends would have manifested themselves in some other way, via somebody else's will and live and love and dreams and desires and so forth -- probably ... not definitely, never definitely, but probably...

So the question I have been musing about is -- how can we think about all this in terms of the "global brain"?   (i.e., the set of computing and communication and cognition patterns occurring around the globe, among humans and various electronic devices, which arguably has a kind of coordination and dynamics to it that is vaguely "neural" or "cognitive" in nature...)

Can we say that the humanoid robot design we were cooking up over dinner that night, is a thought produced by the global brain?   In what sense?

OK, I'm going to get a little bit more technical now -- impatient readers please bear with me!  I'll get back to the qualitative and wacky stuff at the end...

Let me review the concept of "glocal memory" as I've defined it elsewhere,.in the context of human neuroscience and cognition...

In a neuroscience context, "glocal memory"  refers to the hypothesis that, in many cases, memories in the human brain have both


This general notion has been around a while (without use of the word "glocal") -- e.g. William Calvin's work from way back when.

"Glocal memory" overcomes the dichotomy between localized memory (in which each memory item is stored in a single location within an overall memory structure) and distributed memory (in which a memory item is stored as an aspect of a multi-component memory system, in such a way that the same set of multiple components stores a large number of memories). In a glocal memory system, most memory items are stored both locally and globally, with the property that eliciting either one of the two records of an item tends to also elicit the other one.

In a 2013 paper, I gave a moderately detailed, fairly speculative model of glocal memory in the human brain.

The classic example of localized memory in the brain is the Jennifer Aniston neuron.   Many neuroscientists' brains were blown by the discovery of individual neurons in the hippocampus that fire specifically when the face (or voice, or name) of the actress Jennifer Aniston is perceived.

We must remember, though, that these localized memories in the hippocampus are not the ONLY kind of memories in the brain.   The cortex contains memories as well, that appear to be stored in a very different way, involving diffuse activation patterns distributed across large numbers of neurons.

"Glocal memory" in the human brain, then, appears to involve dynamic interaction between localized "concept neurons" in hippocampus, and more distributed memory attractors in cortext. 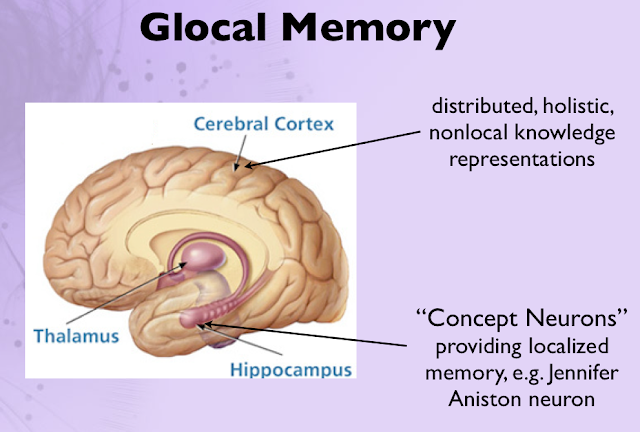 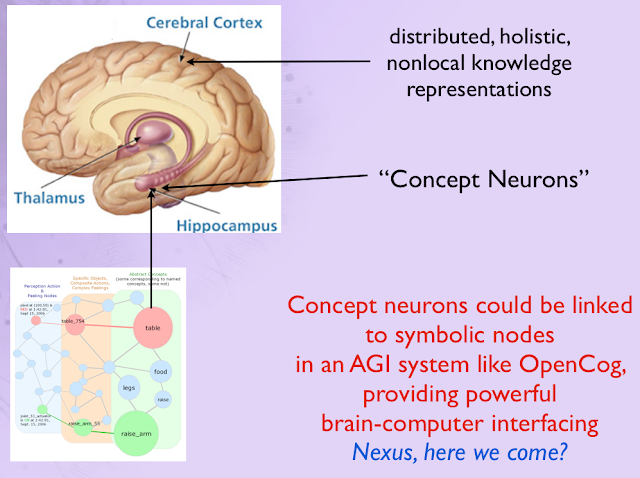 Actually, OpenCog's internal representations are glocal as well -- OpenCog has a distributed-attractor modality for representing "Jennifer Aniston", as well as a localized-node modality.  But connecting localized representations to one another would seem the easiest way to connect OpenCog to a human brain, enabling human-AGI co-cognition.

Previously I have described a Global Brain as follows:

The general idea of the Global Brain is that computing and communication technologies may lead to the creation of a kind of"distributed mind” in which humans and AI minds both participate, but that collectively forms a higher level of intelligence and awareness, going beyond the individual intelligences of the people or AI’s involved in it.

To what extent a Global Brain currently exists, or will soon come to exist, is a tricky question on which different experts will give different answers.   Concrete measurement of the degree to which a Global Brain is present is not something we really know how to do right now.   Francis Heylighen and his colleagues at the Global Brain Institute in Brussels are working on it!


I guess you can see where I'm going now.   The glocal brain has already put the idea into your unconscious mind, right?

Perhaps we should view the Global Brain as possessing glocal knowledge representation -- both localized and distributed representations of the same piece of knowledge, acting in a coordinated way.

Localized representations have advantages for symbolic thinking -- they are easier to manipulate and combine in certain ways.   Global distributed representations have advantages for creative thinking -- they are easily morphable and content-addressable, and have analogy and metaphor built right into them.   The human brain/mind makes use of both, why shouldn't the global brain?

The Global Brain's "concept neurons" are precisely: The ideas that are explicitly formulated in our own conscious minds, and written down in our books and papers and emails and so forth.

And the Global Brain's distributed cortex-type memories, are the subtle trends and broad patterns that guide us throughout our lives in barely-perceptible ways.

Of course our individual human actions are not strictly determined by the patterns constituting the Global Brain's distributed memories.   We may not have "free will" in a classical sense (an ill-defined notion), but we have something related called "natural autonomy" -- in a pragmatic sense, we can choose our actions.  But our choices are heavily guided by the broader patterns in which we live -- in a way that, statistically, causes us to behave like vehicles for the Global Brain's concept neurons ... most of the time...

The Global Brain differs from a human brain/mind in many ways -- it lacks an extremely pushy, particular goal system, like we humans get from our hindbrains.   In the terminology of Weaver and Viktoras from the Global Brain Institute, it is more strongly an open-ended intelligence -- a self-organizing complex system ongoingly creating new patterns and exploring and overcoming its own boundaries, rather than a system oriented toward optimizing achievement of certain specific goals.   But the glocality of the Global Brain's memory is one aspect in which it resembles human brains.

In the end human brain/minds are open-ended too -- but we can at least roughly approximate human brain/mind dynamics by thinking about optimization toward achievement of specific goals.   For the Global Brain, this kind of analysis isn't even an OK approximation, it's jut wrong.    An open-ended intelligence type model is utterly necessary from the beginning.

What was happening in that dinner in Tsim Sha Tsui, then, was -- the Global Brain was trying to enshrine some patterns from its distributed, global memory store, in its localized memory store.   It was trying to pack some broad, diffuse, distributed patterns into "concept neurons" -- i.e. into the brains and writings and software and hardware creations of the humans sitting around the table, and all their employees and colleagues.


AGI systems capable of aggressively recognizing patterns in the activity of humans and AGIs and narrow AIs and other software and hardware on the planet, may be able to serve as higher-capacity concept-neuron networks than people are -- and may  massively accelerate the ongoing, iterated process of concretizing global memory patterns into localized patterns.

Indeed, once this is said it seems almost trivial and obvious.   Of course it will be.

The Global Brain is far more intelligent than any individual human.  And AGIs are not going to be developed in a box in somebody's basement, or in some top-secret military or corporate lab -- they're going to be out there on the Internet, enhancing everyone's searches and analytics and so forth ... making the Global Brain smarter and smarter.

(yeah, yeah... of course there are other possibilities.   An isolated AGI in a secret lab could massively self-improve and achieve a secret Singularity and then wreak its good or ill upon the world....  But the odds of this seem rather low to me, in spite of the preoccupation Bostrom, Yudkowsky and others have with this outcome....)

What this incrementally-uploaded Global Brain will then morph into, as it ongoingly learns and self-improves -- and encounters aspects of reality the human-based Global Brain never imagined -- is another question.   We can't know and our current Global Brain can't know, any more than cockroaches or cavemen could predict the course of the Internet.

Very intriguing, especially in light of Facebook's M utilizing both neural nets and human interaction. A Global Brain that would essentially be a world wide wifi bubble, with neural nets dynamically enabling interaction of humans and learning from the interchanges.