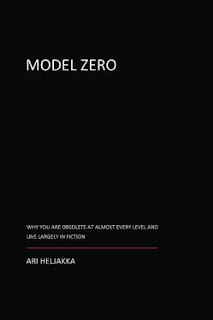 Model Zero: Why You Are Obsolete at Almost Every Level and Live Largely in Fiction


This will be a mix of review and personal reaction...

First a few fragments from my episodic memory: In the mid-aughts a Finnish programmer/scientist/philosopher named Ari Heljakka collaborated with me on the Novamente Cognition Engine, the predecessor to the OpenCog AGI system I’m now working on.   Along with discussions on the specifics of our AI work, we often dug deep into philosophical issues.  Ari had a unique and powerful view of humanity and the path to transhumanity, and we kept in touch after he left the Novamente project to found a software company, Dreambroker.

Ari had a lot of insights about a lot of things, but what struck me most was his steadfast dedication to the task of perfecting his own mind — of transforming himself from a human being driven by human emotions and instincts, to a fully rational goal-achieving machine.  One thing we frequently discussed was the aesthetics of goal-system sculpture — how to shape one’s goal-set in a way that effectively lends itself to being an effective goal-achieving system.

At some point in there, Ari wrote a book on his philosophical views, “Model Zero.”  I read it in PDF form years ago; but I just noticed recently that the book had made its way to Amazon.com ….

If I had to write a blurb for the book, this would be it:


Have you ever considered transforming yourself from an ordinary human mind into a supremely rational, self-reflective, logically and conceptually coherent goal-achieving system?   Do you consider this idea at least interesting and worth musing about, or understanding better?  If so, this is a book for you.  Combining the philosophic and the pragmatic, Heljakka carefully explores what the human mind is, and what the human and transhuman mind could and should be.

“Model Zero” is elegant, pithy and at times cryptic; but always well thought out and worthy of careful reading and reflection.  It’s not leisure reading, and it’s not supposed to be; but there are no prerequisites beyond an ability to deal with abstractions and a willingness to think hard.


I have to admit, I don’t feel personally inspired to entirely follow the prescription for life that is implied by Ari’s book -- though I do find the ideas in his book insightful and inspirational both intellectually and personally.   In recent years my thinking has been drifting in different directions.   I’ve been impressed by Weaver and Viktoras’ notion of “open-ended intelligence”, which takes self-organization and autopoiesis and evolutionary growth as primary, and views goals and the quest thereof as particular patterns that emerge in this open-ended growth and organization process.   This view doesn’t necessarily contradict Ari’s view, but it certainly places the emphasis differently.   On a personal level, it seems there is a big difference between


Of course, one can formulate the latter as a goal, and then say that achieving powerful open-ended intelligence is just one goal that one may work toward.  But the question is whether this is really a valuable perspective to take on the dynamics of an open-ended mind.   I’m sure it’s a perspective with SOME value -- even dramatic value -- but I’m not currently sure how much.  Other, complementary views also merit exploration.

But Ari has formulated the “mind as a rational goal-achieving system” more clearly than anyone else I’ve known or read, and he makes all sorts of other interesting points along the way….  If only there were more deep thinkers like this in the world; if only there were more books recording such deep, original, intriguing thoughts…

Ari's goal0 is pretty similar to what one could say the implicit goal of open intelligence is :p