I have been musing a bit about combinatory and probabilistic logic, and what they have to teach us philosophically.   It’s perhaps an obvious sort of point, but to me it’s interesting to reflect on these basic foundations and try to understand what are the core, minimum requirements for being able to perform computations and think about the world.

The conclusion of my musing here will be list of commonsensical semantic primitives, so that, roughly speaking: Any mind that has mastered these, should be able to do universal computing and universal probabilistic logic … limited only by its available resources.

The Crux of Combinatory Logic

Let us start with computation; and what is in a sense the simplest formalism for universal computation, combinatory logic.

One thing combinatory logic tells us is that to do any kind of computation, all we need is to be able to do the following things:

This set of basic operations is enough to do general-purpose computation.   To see, this, note that the S and K combinators, defined as

are enough to do general-purpose computation.   For,

(Note that, according to the sufficiency of S and K, remove-beginning is not strictly necessary; we can make do with just remove-middle and remove-end, and derive remove-beginning therefrom.)

We can depict this graphically by adopting some simple conventions:

The following diagrams illustrate these conventions: 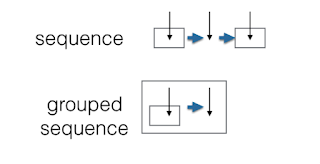 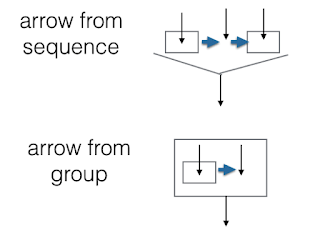 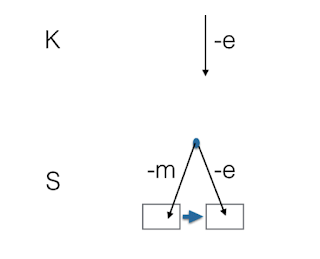 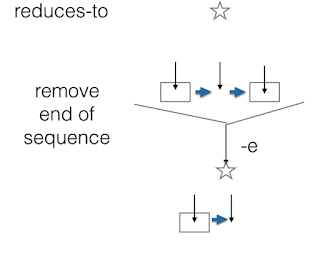 In this formalism, an arbitrary computation can be represented as a series of rows, where each row consists of a sequence of boxes (some containing other sequences of boxes) or spaces; with each lowest-level box and each space containing the pointy end of an arrow, whose root is some box or bracketed subsequence on the row above.

We can support concurrency in this formalism by interpreting two sequences A and B so that neither A nor B is below each other, as concurrently enactable.  We say that X is immediately below Y if there is an arrow pointing from somewhere in X to somewhere in Y.  We say that X is below Y if you can reach Y from X by following a series of immediately-below relationships.

Conceptually, and to be a bit repetitive, what this means is: to do ANY computation whatsoever, all you need to be able to do is…

Now, none of the above tells us what things should be arranged in sequence, or grouped in boxes, in the first place.    Combinatory logic as formulated above can only do purely mathematical computing.  To do computing relative to some body or other practical system, we need to add at very least one more primitive:


To handle perceptions and primitive actions elegantly, however, it seems this is not enough.   It seems very useful to add a few additional components to our basic model of computation, to wit:

So we then get general-purpose probabilistic-logical computation.

Graphically, to represent these additional algebraic operators, we would add the potential for unordered grouping.  For instance, in this diagram

(To emphasize, these additions are not strictly needed, because pure combinatory logic can be used to emulate these lattice operations.   I just think the latter is counterintuitive and messy, and it’s better to add the lattice operations as primitives.  This is certainly debatable.)

So, to be a bit repetitive again -- philosophically, what this suggests is that to do computing nicely about observations in a world, you also want to have a few other processes at your disposal besides those strictly required for computation:


These basic operations let you do probabilistic logic; and put together with combinators, they let you do quantifier logic … and this logic can then interoperate complexly with computation.

One nice thing is that all these operations are pretty simple and natural conceptually. They are not weird, obscure mathematical operations.  They are all quite basic, intuitive operations.

Looking at these basic operations, it’s not hard to see how the ability for general-purpose computation and logical reasoning would emerge from simpler  organisms lacking this ability.   Each of the basic operations needed to support computation or reasoning seems likely to be useful in isolation, in various situations.  The ability to identify middles and ends, or the ability to insert sequences into other sequences, or the ability to mentally join together two sets of observations, etc. – each of these things is going to be useful in practice for many organisms that cannot do general logic or computation.   But then once these basic capabilities have evolved, due to their partly-separate, partly synergetic-in-various-groupings, utility … then they can come together to do general-purpose computation and logic … and then the utility of this general-purpose logic will reinforce all these capabilities and cause them to pass on through the generations.

Thinking about general intelligence, it seems that if we wanted to take a reasonably good stab at making an unbiased sort of general intelligence, we would make a system that tried to learn concise programs computing patterns in its observations, using a programming language comprising the simple operations enumerated above.   Such an AGI would aim to learn patterns in the world that were as simple as possible, when expressed in terms: of basic lattice operations, corresponding numerical size comparisons; and basic sequence groupings, insertions and beginning/middle/end removals.

Finally, it is a little bit interesting to take these basic mathematical operations and reframe them less formally as semantic primitives.

The verbal primitives we arrive at, from the above math operations, look like:


Every human language, so far as I know, contains good methods of referring to all of the above except for perhaps the latter.  The latter I suspect is handled gesturally and/or in terms of phonological variation, in languages which have limited verbal mechanisms for expressing magnitudes.

At a basic level, it is mastery of these semantic primitives that enables universal computation and universal uncertain reasoning.

An Alternative Language for Automated Programming?

These considerations also suggest a concise elementary programming language, a bit different from existing ones.  What we would have are:


Such a language would not be very suitable for human programming, but could be an interesting alternative for automated programming such as evolutionary learning or probabilistic program inference.   It would seem amenable to a highly efficient implementation, leveraging nice data structures for holding and manipulating sets and lists.

Something similar to these semantic primitives is now being displayed during the operation of ghost175.pl in Perl and Mind.Forth in Win32Forth.

Thanks for sharing this information if you want to read about mba deadlinesthen do please visit our blog.